Click on image to reduce it.
"Finding out true facts from drunken conversations in the taverns of the City is easier than it commonly believed. Give attention to stories that are supported by credible details, told at least by two persons and are not suitable for braggery. Listen carefully, learn interesting facts on forgotten Hammer temples and shocking monstrosities, like fire elementals or craymen. Craymen said to be outnumbered, but spread widely and can be found even within the City in underground caves. They need just damp air and some water pool to survive. Living in groups of three or four, they are far from human by intellect, but smarter then burricks. Some compare their intellect to the dog's one, others boldly say – to a child aged three. One thing is certain - they do not wear clothes, do not build houses and do not have intelligible speech, but only do high-pitched squeals and chirping loudly and disgusting, so that the blood run cold. Do not get caught by their eye - they strike by claws as by a sword, their cuticle is strong as steel armor, and their vital reserve are greater than human has. Most of common people never met such a monster through entire life, because fear to leave relatively safe places, but well aware of the existence of monsters, since craymen has being seen by any adventurer, who has reason to leave safe places, whether it be a smuggler or a treasure hunter."

Something like this might be talking about the craymen in the City. They are quite absurd creatures. For a number of biological reasons, arthropod can not develop to such a complex and large form. Also, without fingers and ability for hand-working, creature got no one reason to have a humanoid body structure. But yet, in reality of the City craymen exist, and they can prove their tangibility by “biting” with their sharp claws, literally cutting intruder to pieces. They are brutal and aggressive, that’s why they can survive in relative proximity to human settlements.

As reference I only had low-poly game model and blurry conceptual art (seemingly surviving only in form of snapshot from documentary video). Well, where are the monster's eyes? Weak sources can not answer this question. Reddish balls at the ends of the head appendages quite clearly are compound eyes, but black spots on the front of the head aso looks like organs of vision, at least real crayfish has similar little eyes. But if that black spots are not eyes, then what they are? Nostrils?

Decided to include two options - let crayman have both pairs of eyes. (*) Main pair are compound eyes, they are good in registering movement and orientation in space. They can’t examine and study objects because they provide gross image similar to a roughest mosaic. Additional lenticular eyes fill this gap and recognize objects - crayman had enough brains for it, unlike real arthropods. These eyes have a very narrow field of view (thirty degrees, no more) require a long "focusing" and has low light sensitivity, but can see more detail than compound eyes. Stay away from that narrow area and don't move rapidly, and crayman will just pass by. Then you can strike by any weapon in the only weak spot - the back side of the "neck". There monster has very vulnerable ganglion under soft and thin cervical plates, and he will faint from the unbearable pain, uttering at the same time a deafening long screech. 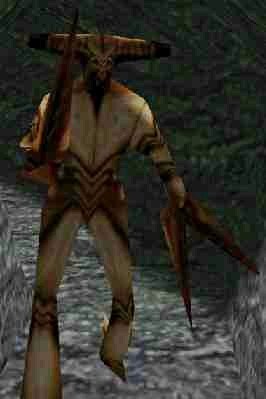